NEW YORK — In a move that may be an indication that the brief era of David Robertson as closer is about to end, the New York Yankees on Friday signed left-handed reliever Andrew Miller to a four-year free-agent contract.

The deal was officially announced by the Yankees, with its value at $36 million, sources told ESPN.

The 6-foot-7 Miller, who will turn 30 in May, spent the end of the 2014 season with the Baltimore Orioles, having been traded by the Boston Red Sox — for whom he had pitched the previous 3 ½ seasons — at the trade deadline.

Miller began his career with the Detroit Tigers, who selected him with the sixth overall pick in the 2006 amateur draft, and pitched three seasons with the Florida Marlins before joining Boston in 2011. Miller, essentially a two-pitch pitcher (fastball and slider) has a 30-38 career record and 4.91 career ERA.

But over the last two seasons, he has emerged as one of the game’s elite relief pitchers. In 2014, his strikeout-per-nine-innings ratio of 14.87 was second only to the Cincinnati Reds‘ Aroldis Chapman (17.67) in all of baseball. Miller also held opposing hitters, both right-handed and left-handed, to puny batting averages, and in fact was slightly tougher on righties (.145) than lefties (.163). His WHIP was a miniscule 0.600.

The addition of Miller gives the Yankees a one-two late-innings punch with 6-8 right-hander Dellin Betances, who in 2014 was the Yankees’ best reliever in his rookie season. And if nothing else, it affords them leverage in contract negotiations with Robertson, who performed well in 2014 as the successor to Mariano Rivera, converting 39-of-44 save opportunities. But in his first year of free agency, Robertson declined the Yankees’ $15.3 million qualifying offer and is said to be seeking “Papelbon money,” a reference to Jonathan Papelbon, the Phillies closer who signed a four-year, $50 million contract in 2012.

“[The Yankees] might still sign Robertson, but not at that kind of money,” a source with knowledge of the negotiations told ESPNNewYork.com on Friday. “He’s going to have to come way down.”

A well-known baseball agent not connected with Robertson or Miller told ESPNNewYork.com this week that he believed the Yankees were preparing to part ways with Robertson, who began his Yankees career as a middle reliever in 2008.

“I think they’re going to let him go,” the agent said, “and take the draft pick instead.”

The Yankees would be entitled to a compensatory pick in the first round of the 2015 amateur draft if Robertson signs with another team. Asked Friday afternoon on “The Michael Kay Show” if it was still possible the Yankees would sign Robertson, Yankees general manager Brian Cashman said, “We’ll see.” 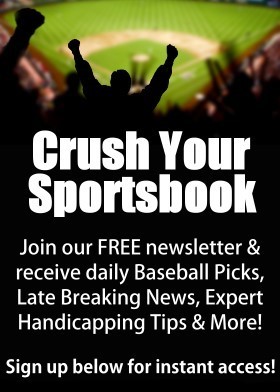 We take your privacy seriously. Your information will NEVER be sold or shared for any reason!

Do you have questions? Connect with us and get answers. LVSI offers free baseball picks & premium baseball handicapping predictions on a subscription basis that are available during the regular MLB season. Let our performance record speak for itself & compare our service with others. Price, Performance, Results! Go with the proven winners at Las Vegas Sports Insider.